Facebook/TeamLaw
Utilities
Link to Team Law  Site Terms of Use

When someone says, “Conspiracy”, immediately a word comes to mind for most people; that word is, “Theory”.  This conditioned response is the result of our hearing these words consistently put together in the media.  Every time a tragic event takes place there are an abundance of ‘conspiracy theory’ reports that pop up with all kinds of ideas of what may have happened and who may have done it.  Still, the presupposed theoretical nature of a presupposed conspiracy only remains a theory until sufficient facts prove what the American people have been told is false; then the conspiracy is no longer a theory it is real.

After working over 72 hours non-stop, I had just gone to bed at about 5:30 on the morning of September 11th, 2001.  When the first airliner hit the first tower at the World Trade Center in New York, my wife tried to wake me but I just wanted to sleep.  After the Pentagon was hit, she tried again and I awoke.  The Pentagon???  I could not believe it.  I went into the living room with the rest of the family and watched in amazement—but as I watched the Pentagon in flames I could see no evidence of debris from the airplane and the hole in the side of the pentagon just did not seem large enough to conceal a Boeing 757.  Then they reported that the black box flight recorders were not found.  We can understand the possibility of the flight recorders getting destroyed in the tumbling towers destruction but, the flight recorders were designed for just the type of crash the plane made into the Pentagon—so why were they not found?  Why is there no evidence of an airliner at the Pentagon?

Cell phones of that period could not track at airliner speeds (over 200 mph), at elevations 500 feet above the path between cell towers and certainly not from within the shield of the Airliner’s grounded aluminum skin.  Those stories were simply impossible.  When those preposterous stories were immediately challenged some of those stories were explained away by saying the callers must have been calling from the seat back phones on the airliners. OK, so why then does the conversation indicate those people were in the airliner’s toilet rooms, where there are no such ‘seat back phones?’  And, why did people report seeing caller id from their loved one on their phones?  The official media reports simply make no sense.

Why would people that spent millions of dollars in planning and preparation for such a time critical mission of terror risk exposure by allegedly starting a fight with a family in the parking lot as they parked their car?  They wouldn’t.

Why would devout Muslims wipe clean their car and leave a fingerprint free copy of the Koran and a video tape from their flight training school in the car’s back seat?  They wouldn’t; especially if they knew they were going to their deaths.

Those media stories simply make no sense!  Yet they were all part of the alleged FBI story portrayed by the TV media that morning.

It was most shocking to see the twin towers of the World Trade Center explode and fall; but once the initial shock wore off and they repeated the show for weeks, we asked the questions: ‘Why did the buildings explode?  If the explosions, smoke and fires of the initial crashes were caused by the fuel cells rupturing and burning. then what caused the massive explosions we watched and heard on TV?  Why do the buildings fall down faster than the large chunks of debris falling from those explosions?’

There are only two possibilities for this last question:

On close examination, evidences indicate the actual cause included both.

Within a few days the FBI had identified 19 alleged Hijackers, at lease seven of which later have turned up alive and well (some had never even been in the United States)—still the FBI has not changed their story.  All of the alleged hijackers had Middle-Eastern Muslim/Arabic style names.  Months later, when American and United Airlines released their passengers and crew manifests, did not list the 19 alleged hijackers the FBI reported and there were no Middle-Eastern Muslim/Arabic style names on any of the Airlines’ manifest lists and all of the passengers listed have been otherwise accounted for.  I contacted an American Airlines representative and asked if there was some kind of block-out of the 19 names — they were aware of no such block out; their manifests were hard printed after the doors of the aircraft were closed and before the flights were cleared to depart as a part of standard procedure.

With all of these anomalies, we began asking questions and someone sent us to a French website that had photo links to United States military’s websites where we found their high resolution photographs along with some of the same questions we had.  We downloaded the photographs and reviewed them.  They tell a story but give no answers that fit with the story the American people have been told through the media.

Look at the high resolution photographs: 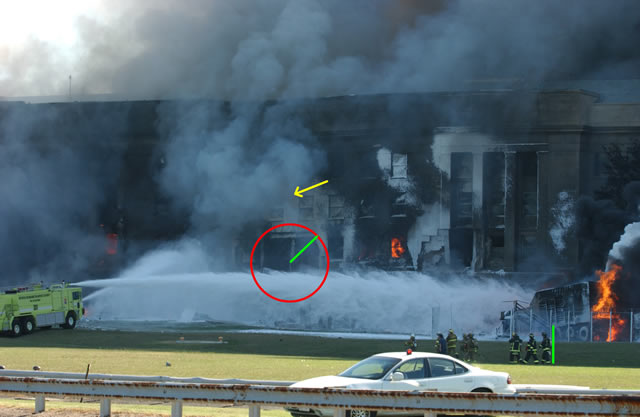 Close inspection of this photograph, after the Pentagon was hit reveals that the only hole in the pentagon (circled in red) has a radius (green line) of about 7 feet (see radius related to fireman). Also notice the lack of any debris on the lawn. Please also notice that there is no evidence of a 44 foot tall tail (yellow arrow), wing or engine impact damage on the building. You may ask yourself, “Where is the Boeing 757?” 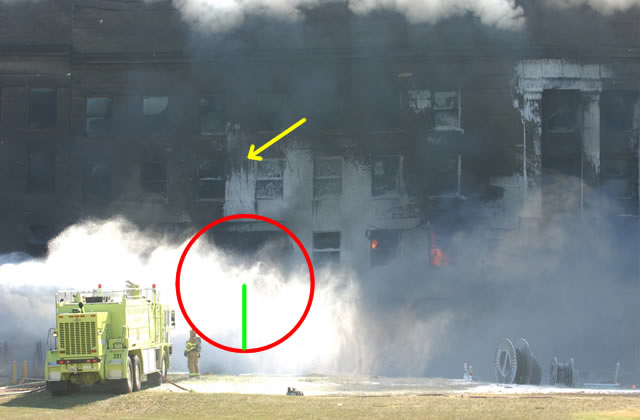 Notice the glass in the windows where the tail section should have hit is still intact.  How is this possible if a Boeing 757 airliner hit this building?  It is not possible.  So what did hit the Pentagon?  It is obvious that something did hit it; but, that something was much smaller than a 757 and it did not carry over 6,000 gallons of fuel.  The answer to that question was shown to the nation when the Pentagon released a series of five images that were taken by the parking lot turnstile time lapse camera.  However, early on we received a much longer version of that recording and it is clear that whatever it was; it was way smaller than a 757?  We don't know what it was; but, one thing is for certain its not a huge Boeing 757; as was reported in the media and by Corp. U.S.

These are only a few of the compelling photographic evidences and questions raised about September 11th, 2001, but they certainly show that the story given to the American people is not the truth about what happened.  At least one thing is proven here, there is a conspiracy involved here at least in the United States Government’s (Corp. U.S.) cover-up of what really happened.


Under Siege – What did hit the Pentagon?

Warning if you are not familiar with the facts of the events of that day your research into them may be even more shocking than the original events and they will certainly change your perspective.

As the Republican Convention unfolded in the year that followed it became apparent that the Bush Campaign was alleging that because the Democrats are not in favor of a continued and prolonged war on Iraq, and were not interested in starting up a new war in Iran, that Bush was labeling them as terrorists.  We also recall Bush stated many times that these terrorists that attacked our nation will be held accountable.  We wonder what it will take to discover the truth and if the real terrorists will be brought to justice.  We remember the lies that were told to inspire congressional support to start the wars against Afghanistan and Iraq. We continue to watch American soldiers die in support of those wars. We also cannot miss all of the local surveillance cameras going in place on virtually every signal light at every intersection in the country, in the name of “Homeland Security”, to watch the people around the nation.  The national police force is the second to last element of the communist plan for taking over a large free nation from within.  The last step is to cause the people to revolt against the standing government.

We cannot miss the trend towards a national identification numbering system to number and track the people and Radio frequency ID tags (chips) going into all of the merchandise; passports are slated to receive such tracking chips in October of this year and the new mandatory national ID card already passed and is scheduled to go in place in 2008.  George Bush just gave the CIA control over the other investigative police enforcement organizations (FBI, etc.) in the “central government”.  We recall that when the CIA was initially formed it was considered too powerful an organization to be under the control of government so a committee of the top 40 corporations in the United States was given control over the CIA.  New governmental programs like MATRIX (Multi-state Anti-TeRrorism Information eXchange) merge all corporate and governmental collection of private data together.  “Why?” If not for the purpose of tracking and controlling the people.

These steps against privacy seem to be the last steps necessary to put in place the controls of what John the Revelator prophesied — regarding the Mark of the Beast.  Remember his warning — if you take the ID your name will be removed from the Lamb’s Book of Life.  To avoid that you will have to know what is actually happening around you — read at least the Prerequisite Knowledge in Myth 22 from our Patriot Mythology page as well as the Corp. U.S. Mythology page.

All information on this site is provided for educational purposes only, with all rights reserved.
Use it at your own risk.  Team Law never provides legal, financial or any other form of advice.
All materials on or available through this site are under Copyright © 1996-2013, and may not be reproduced,
except as noted, without the written consent of Team Law’s Trustee.